There is the quintessential image of the writer at his desk, they brood, they beat their fevered brow waiting for the muse. For a start, when you have spinal problems you tend to jump for a bed, here I am in mine, writing away. 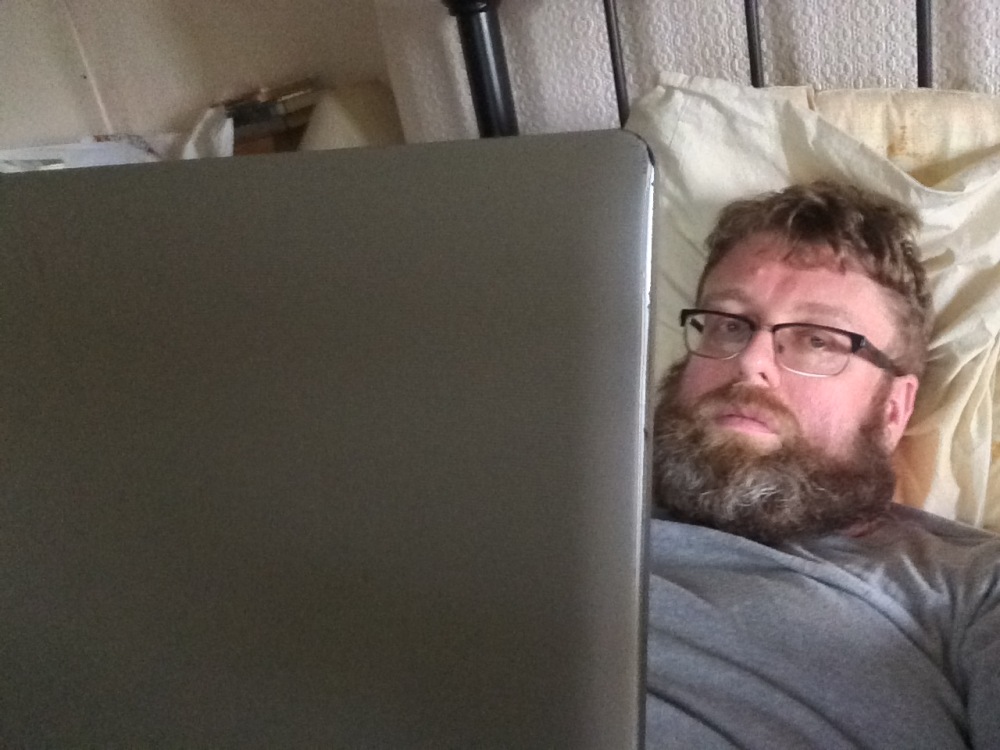 Doesn’t it just scream tortured writing soul? It mainly cries bushy beard and one step away from eating pizza there. Yet, there is a writer’s dilemma here. It is the perception of writers. The idea that we are either grumpy Literary types bemoaning the demise of the novel. See Will Self. Or that we are magical beings who can take you down on twitter. See J.K. Rowling. We are bad. Mad. And syphilitic to know. See Byron. Some of us keep a bear. See Byron again. I too keep a bear, mine is stuffed. What annoys me the most is that writing is often seen as something lofty, something beyond mere mortals for mere mortals could never have come up what we write. There in lies another dilemma. I grew up with Gods and heroes, not in the Greek tales that my biology teachers, Mrs Burns told us or in the stories that my geography teacher recited to us after showing us where Peru was on a map. Got any gum, chum? sticks in my mind, Mr Fisher, along with the threat of violence to kids who didn’t line up in the yard, If you don’t get in line I’ll knock you through those railings and turn you into chips. My Gods and heroes hung around in back yards, at dining tables, on sofas stuffed full of horse hair. For years I thought they shaved horses to do this. The truth was worse. They were my neighbours and family who came to tell their tales, their days, their pasts and through it all my sister and I wove our story. The dilemma still is how we see story, how we see writers, or poets, story is all around us, not just in books but in the voices of young and old. My dilemma lies sometimes in the setting of those stories and how the world has changed into something that is both horrifying and beautiful, how our ability to talk has been challenged by our technology and how our ability to read body language has also waned. We have a lonely nation, an aging nation, a nation who no longer have careers but jobs. A nation who will never have the security of the post-war generation. Technology has sped up the world, but it has also sped up how we interact with society and how society interacts with us. We are moving to a future where jobs will become the province of machines. All we have left then are stories and if we do not embrace them, if we follow the rabbit down the hole into shorter and shorter ways to communicate, then stories could become something that are consigned to a golden age when people read and talked, and gossiped, and told tales that made their friends laugh, cry and fight. The future could be myth. The future could be silent.

This site uses Akismet to reduce spam. Learn how your comment data is processed.